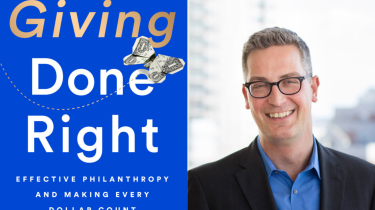 Phil Buchanan’s book, Giving Done Right: Effective Philanthropy and Making Every Dollar Count, offers data-driven insights, tools, and practical examples to understand exactly what it takes to make a difference – and why giving effectively is so important right now in the face of concerns about inequality, the role of business, and governmental dysfunction. This practical guide is also filled with stories of the people who bring philanthropy to life.
Join us for a lively conversation about the power and perils of philanthropy moderated by Elysa Gordon, Vice President and Senior Advisor at the Hartford Foundation for Public Giving.
*******
About the Book
A majority of American households give to charity in some form or another--from local donations to food banks, religious organizations, or schools, to contributions to prevent disease or protect basic freedoms. Whether you're in a position to give $1 or $1 million, every giver needs to answer the same question: How do I channel my giving effectively to make the greatest difference?
In Giving Done Right, Phil Buchanan, the president of the Center for Effective Philanthropy, arms donors with what it takes to do more good more quickly and to avoid predictable errors that lead too many astray. This crucial book is a counter to those who diminish the role of philanthropy and the nonprofits it supports. While the book offers constructive critique, it also highlights what is possible when giving is done right, pointing to exemplars like software entrepreneur Tim Gill, who helped expand rights for LGBTQ people, as well as to nonprofits doing heroic and unsung work everyday. It busts commonly held myths and challenges the idea that "business thinking" holds the answer to effective philanthropy.
*******
About the Author
Phil Buchanan (Wesleyan class of ’92), president of the Center for Effective Philanthropy (CEP), is a passionate advocate for the importance of philanthropy and the nonprofit sector. He is deeply committed to the cause of helping foundations and individual donors to maximize their impact. Hired in 2001 as the organization’s first chief executive, Phil has led the growth of CEP into the leading provider of data and insight on philanthropic effectiveness. CEP has been widely credited with bringing the voices of stakeholders to funders and with contributing to an increased emphasis on key elements of effectiveness.
Phil is co-author of many CEP research reports, a columnist for The Chronicle of Philanthropy, and a frequent blogger for the CEP Blog. Phil is also co-founder of YouthTruth, an initiative of CEP’s designed to harness student perceptions to help educators and funders accelerate improvements in K–12 schools and classrooms. In 2016, he was named the Nonprofit Times “influencer of the year.” Phil serves on the board of directors of Philanthropy Massachusetts and the National Council on Aging.
*******
About the Moderator
Elysa Gordon (Wesleyan Class of ’89) is Vice President and Senior Advisor to the President at the Hartford Foundation for Public Giving.  In this role, she advances the Foundation’s mission and strategic direction and leads the Foundation’s research and evaluation, impact investing, public policy efforts and special initiatives. She serves on the leadership team of the Community Foundations Opportunity Network, a national leadership and action network of community foundations committed to narrowing the youth opportunity gap.
Elysa also has an extensive background in leading collaborative efforts to improve services for families and children.  As Assistant Child Advocate for the Connecticut Office of the Child Advocate, she led successful reform efforts on behalf of youth involved in Connecticut’s child welfare and justice systems.  She is also the author of several articles on the well-being of children involved in the child welfare and justice systems.  Prior to moving to Connecticut, Elysa served as senior policy advisor for the New York State Permanent Commission on Justice for Children, chaired by Chief Justice Judith Kaye, where she developed the Babies Can’t Wait Initiative, a statewide court-based innovation to maximize the well-being of infants in foster care and held leadership positions at Gay Men’s Health Crisis, Inc. serving individuals living with HIV and AIDS.
Elysa earned her bachelor’s degree with honors from Wesleyan University, a master’s in social work from Columbia University and law degree from Fordham University where she was a Stein Scholar in Public Interest Law.  She has received the 2009 Stein Scholars Distinguished Graduate Award and the 2017 Fordham Law School Distinguished Alumni Award.
Business Directory News Releases Events Calendar Hot Deals Member To Member Deals Marketspace Job Postings Contact Us Information & Brochures Weather Join The Chamber