Join us for our
VIRTUAL LUNCHEON as we welcome Dr. Edison Liu, M.D.

Dr. Liu is the president and CEO of The Jackson Laboratory. Previously, he was the founding executive director of the Genome Institute of Singapore (2001-2011), and was the president of the Human Genome Organization (HUGO) from 2007-2013. Between 1997 and 2001, he was the scientific director of the National Cancer Institute's Division of Clinical Sciences in Bethesda, Md., where he was in charge of the intramural clinical translational science programs. 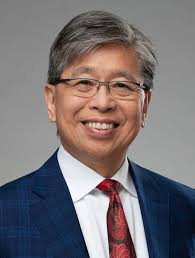 From 1987 to 1996, Dr. Liu was a faculty member at the University of North Carolina at Chapel Hill, where he was the director of the UNC Lineberger Comprehensive Cancer Center's Specialized Program of Research Excellence in Breast Cancer; the director of the Laboratory of Molecular Epidemiology at UNC's School of Public Health; chief of Medical Genetics; and the chair of the Correlative Science Committee of the national cooperative clinical trials group, CALGB. Dr. Liu is an international expert in cancer biology, genomics, human genetics, molecular epidemiology and translational medicine.

Dr. Liu's own scientific research has focused on the functional genomics of human cancers, particularly breast cancer, uncovering new oncogenes, and deciphering on a genomic scale the dynamics of gene regulation that modulate cancer biology. He has authored over 300 scientific papers and reviews, and co-authored two books. He obtained his B.S. in chemistry and psychology, as well as his M.D., at Stanford University. He served his internship and residency at Washington University's Barnes Hospital in St. Louis, followed by an oncology fellowship at Stanford. From 1982 to 1987 he was at the University of California, San Francisco, at the G.W. Hooper Foundation.